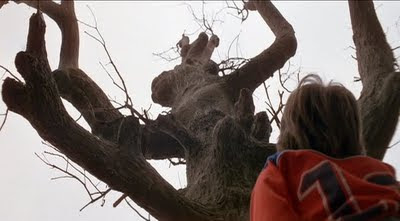 Poltergeist is undoubtedly one of the best ghost stories committed to film. Heck it ranks right on up there as a all time classic horror flick. But as far as the Arbor Day connection--well it's bit thin. But that tree....oh that tree! It's a great ploy of the spirits to "possess" the creepy tree that just happens to be outside Robbie and Carol Anne's bedroom during a very scary storm. The tree, of course, scoops Robbie up and hauls him outside into the lightening--all the while, Carol Anne is the real object of ghostly desire. Robbie's "tree predicament" leaves little Carol Anne all along in the house, giving the evil spirit that covets her the perfect window to kidnap her into the netherworld. The storm is getting closer...Robbie
Posted by Semetra Rhodes at 2:00 PM No comments: Links to this post

From E.C. comics, Stephen King and George Romero (!), comes this tale of Jordy Verill, played by King himself, and his encounter with a very odd meteorite! While Jordy witnesses the crash landing of said "meteor," and then fantasizes about how much the college will pay him for it (a whopping $200!), he fails to notice that the extra-terretrial object is emitting a strange gas. After waking to the worst shaving nightmare ever, Jordy then discovers he's grown a green, plant like beard.... Well, things go downhill pretty fast from this moment. Jordy finds himself wanting to take a bath in the worst way....a bad idea, as the apparition in his bathroom mirror of his long dead father tries tell him! You ain't gonna get in that tub, are you? It's the water it wants, Jordy. Don't you know that? You get in that water, you, Jordy, you might as well sign you death warrant! Jordy's dead father
Posted by Semetra Rhodes at 1:04 PM No comments: Links to this post 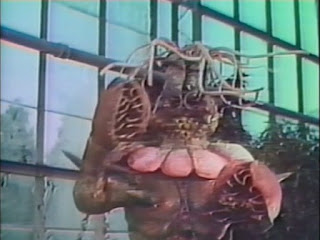 Better known as The Revenge of Doctor X, in some places the Mad Doctor of Blood Island (and lesser known here in the US as The Venus Fly Trap), this is definitely a piece of late 60's/early 70's shlock. It is sort of remake of Frankenstein with a low budget japanese frame. It has absolutely nothing to do with the Doctor X gettin' him some revenge, in fact, the doc is Doctor Bragan, played by James Craig--a worn out NASA scientist, and not a very convincing one at that. No one named "Doctor X" even appears in the film. If there is any revenge here, it would have to be Doc Bragen going bonkers after taking a "rest cure" in Japan, which he travels to, inexplicably, with his Venus Fly Trap plant! He gets around to unleashing a blood craving plant creature on the Japanese countryside, after going stark raving mad (evil laughter and all). Of course, this all happens after the topless sun bathing on the local beach. I have to say, however, that I have a slight soft spot for this plant creature! I mean, how cool is a bi-pedal, blood sucking plant with venus fly traps for hands and feet?? It's most definitely at home on killer plant celebration of Arbor Day. Having said all that, though, I can also say that I completely understand how this movie garners at 2.9 on the Internet Movie Database!! Here, take the lamb, take the lamb Dr. Bragen to his "creature"
Posted by Semetra Rhodes at 12:41 PM No comments: Links to this post

First up: The Little Shop of Horrors 1960

Eclipsed somewhat by it's famous musical remake, the original of this people munching venus fly trap from hell has it's own charm. First of all, this is a Roger Corman movie. Next, Jonathan Haze is every bit the Seymour that Rick Moranis is, without the singing, of course. [The only singing here is provided by Jack Griffin , tackling the role of "Drunk". delighting us with the likes of Auld Lang Syne, etc. in inebriated tones.] Haze's Seymour seems more innocent that Morainis', possibly because, as mentioned, this IS NOT a musical. He is easy to feel sorry for, and laugh at--all at the same time and not nearly as much of a "stumble-bum". Jackie Joseph is every bit the Audrey as Ellen Greene; in fact, it's quite chilling, at least to me (and maybe I'm easily impressed) how these two women are so alike, like twins, in this role! Of course, the original Little Shop is most famous for Jack Nicholson's appearance as the laughing gas loving dental patient Wilbur Force; but we have other roles here that are just as memorable. Mel Welles, originally a NYC area clinical psychologist and radio dee-jay, in the role Gravis Mushnik (who reportedly helped with the direction of the film) and Leola Wendorff as Siddie Shiva (what a name!), a character that does not even appear in the Frank Oz remake. And the above mentioned Jack Griffin's son Charles B. occupying 5 different roles: Kloy/Drunk at Dentist/Screaming Patient/Audrey Jr./Burglar at Flower Shop. "I'm going to stay behind as look after this mishugina plant" Gravis Mushnik
Posted by Semetra Rhodes at 10:42 AM No comments: Links to this post 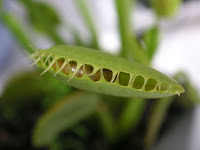 Killer plants in the movies have been around since at least the "irradiated" 1950's, when everything in monster movie land was big, atomic and, well...let's just say that by the time they got around to the killer plants, they were running out of things to "atomisize." Tomorrow is Killer Plant day All day. I'm going to "live blog" the movies as they play. I am not new to horror movies!!! I am very new to blogging...just warning. See you tomorrow.
Posted by Semetra Rhodes at 10:32 AM No comments: Links to this post 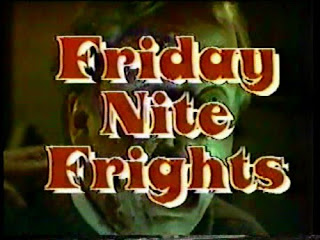 Coming Soon. Blogging on the old phenom of Friday Frights.
Posted by Semetra Rhodes at 8:17 PM No comments: Links to this post