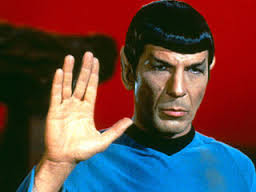 I never saw any first run episode of the original Star Trek series, however, re-runs of the series were abundant during my childhood.  I developed a crush on the 1/2 Vulcan 1/2 Human Spock (played to perfection by the late great Leonard Nimoy) very early.  There was not just the strong, silent type; here were a philosophically interesting race of people who had very ancient traditions that lasted time challenges through the ages.  I needed to know more.  Of course, another aspect of Spock that also attracted me to him, was his struggle with his mixed heritage; causing him to have to work extra hard to follow the "Vulcan Path."  Now, obviously I'm not part alien, part human; but I do come from a mixed race family that has a long Native American background; and so many people in my family have struggled with squaring this in their personal lives.  I was always a bit of black-sheep; wanting to be proud of it, play it up, but also to follow the old traditions that went at odds to the religion that most other family members embraced.  With Spock, well, he rebelled when he joined Starfleet; but even as Science Officer on board the Enterprise, he kept with his traditions.  Take, for example, one of the first episodes to show the origins of the Vulcan tradition to conquer their emotions, in "Amok Time" (S2, Ep. 5); when we shockingly find out that Spock is married and he is experiencing the Pon Farr--he winds up having to fight Captain Kirk (William Shatner) to the death.  No holes barred here.  We see the deep traditions of the Vulcan people, along with their ceremonial processions, dealing with the break-down of the thing they hold dearest--complete control of all emotions; but apparently the most important emotion of all--sexual urges. After Spock believes he's killed his captain, when finding him still alive--he lights up in the largest of smiles.  Hard not to fall for that!

If Nurse Chapel (Majel Barrett) can fall in love the Spock, why should the viewer be immune to his unconventional charms?  I mean, for one thing, there is his near constant logical banter with Kirk and Dr. McCoy (DeForest Kelley), as they are always on a quest to playful mock him and force an emotional response from him.  Good friend indeed he must be to them both to put up with it.  Another alluring quality.  Then there are the moments when he gives away a "hippie like" sympathy.  My mind turns especially to "The Way To Eden" (S3, Ep. 20) when Spock actually joins a band of space hippies in a lounge song playing modern version of a Vulcan harp (that's Charles Napier, by the way, on the "space guitar"--you may recall that he came to a horrible end in The Silence Of The Lambs....)

Probably the most sexually charged episode featuring the complexity that is Spock, comes in "The Enterprise Incident" (S3, Ep.2).  On first viewing, one is genuinely confused as to why Spock would utterly betray Starfleet, and indeed, his own people, to be with the female Romulan commander (Joanne Linville) ...other than he so sexually smitten with her, that he has lost all command of his emotions; in other words he can be seduced.  He certainly puts on the best performance of a man playing the enchanted lover to her.  Of course, it turns out to be just an act...but, oh, what an act!  Or is it?  What Spock says to her at the end of the episode, leaves a little room for something very suggestive (!), "Military secrets are the most fleeting of all.  I hope what you and I exchanged something more permanent." (Whew!)

Contrast this with Spock's actual behavior in the next to the last episode of the show, "All of Our Yesterdays."  Spock, Kirk and McCoy get caught up the distant past of a far flung planet after misunderstanding what the planet's technology was created for.  Gradually, Spock's emotional self starts to come back to him completely against his will--this is very different from the Pon Farr!  He takes it to be his human side, but has to admit that it is probably more his Vulcan ancestry that is emerging.  He fights with Dr. McCoy and falls in love with a native inhabitant also trapped there--Zarabeth (Mariette Hartley).  He actually has a real relationship with her.

Although, I've concentrated on the original Star Trek series here, the original Spock was never gone in later incarnations of the Star Trek universe, showing up in a series of films (two of which Nimoy actually directed), having an appearance on Star Trek: TNG; and, indeed, showing up as the second Spock in J. J. Abrams movie reboot to the original as the second (much older) Spock, meeting himself in a much younger state (Zachary Quinto).  We are reminded how long-lived Vulcans are, even if they are only 1/2 Vulcan!  And, even in old age the allure remains. 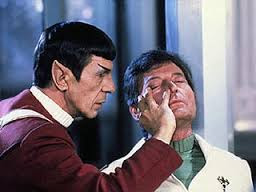 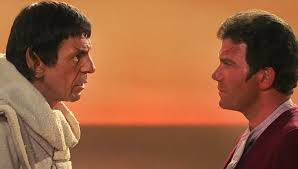 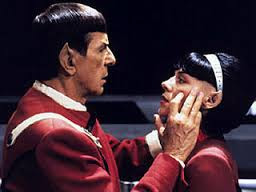 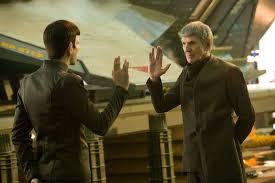 Posted by Semetra Rhodes at 3:44 PM 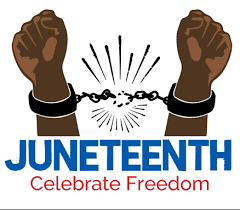 Let's Make it a National Holiday! 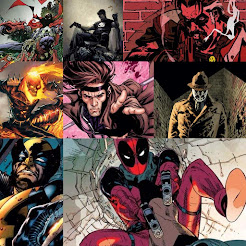 Behind The Scene edition [clickable image] 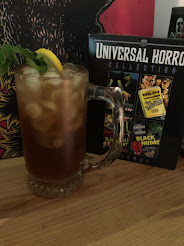