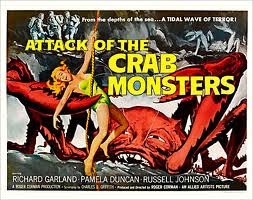 Gotta get some Roger Corman action in here somewhere today!!  This is his 1957 gigantism entry---with really, really big and hungry crabs!  But these aren't your typical atomic anomaly.  These things absorb the thoughts of their victims and actually taunt future victims with them!!

Screenplay by:  Charles B. Griffith 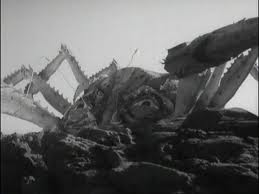 Tagline:  From the depths of the sea...a tidal wave of terror 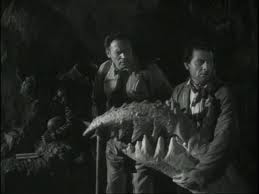 Was released along with Not Of This Earth (also a Corman film) as a double feature in drive-ins.

A scene involving two pilots that are flying the plane that explodes was shot with scripted lines, but was cut from the final version.

Actor Russel Johnson broke his toe on the set, due to the film's low budget, however he got no time off.

Two people "played" the crab, with one Ed Nelson providing the voice, and the other, Beach Dickerson operating the crabs arms. 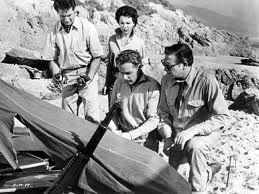 Posted by Semetra Rhodes at 4:02 PM