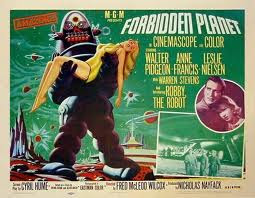 This is the only movie I've got tonight that is on Blu Ray, which I haven't actually watched before, but given the crazy, wild Eastman color that the film was shot in, it should be a hoot. Robbie the Robot should look interesting.  It should also be mentioned that this is the only film today with a writing credit going to William Shakespeare!!

Music by:  no one...it doesn't have a soundtrack, though the electronic composers the Barron's were actually blocked from being credited in the category through the studio system.

Tagline:  Earthmen on a fabulous, peril-journey into outer space! 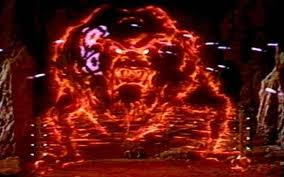 It is credited as being the first major motion picture to have the music performed entirely on electronic instruments, but it's "soundtrack" is provided by various sounds that things, devices and creatures give off in the course of the film.

The music composed for the original theatrical trailer for the film was composed by Andre Previn.

One famous scene that was written as comic relief, but never filmed has Robby the Robot responding to the ship's cook who has complained about a lack of female companionship--he brings him a female chimp.

Was shot on the Wizard Of Oz soundstage.

Is loosely based on Shakespeare's The Tempest.

Was nominated for an Academy Award.

Posted by Semetra Rhodes at 7:19 PM