The Most Low Budget April Fools! 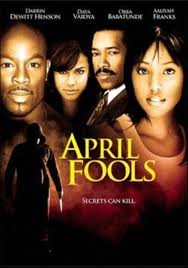 This send up of April Fools horror is from a year earlier than the video remake I just watched.  I gets everything from rave reviews for it's (mostly) all black cast, to the most awful reviews of the acting and special effects (many of the bad reviews come from people also say that that are African American).  One thing is for sure, there is little on the web, aside from viewer reviews on movie databases.  I haven't seen it, but from what I've read, it is based almost completely on the script from Slaughter High--only without the camp.  We'll see.
Oh, Oh I Did Find This:
April Fools TRAILER DVD in stores 9.11.07 by hitme1tyme


Huffington Post has a rundown of media pranks of the day.  They can be found here.
Posted by Semetra Rhodes at 9:18 PM